On safari in the Pilanesberg, South Africa

We had the most fantastic week game viewing (“on safari”) in the Pilanesberg Game Reserve, 2 hours from Johannesburg and Pretoria, in South Africa.  It is a small game reserve in the North West province, but still has the big five.

We stayed at Kwa Maritane Bush Lodge with my parents who had booked the mid-week break even before we knew we were coming to South Africa for a few months.  And they were kind enough to ask us along.

Kwa Maritane was great – but the piece de resistance was that they had a waterhole where they connected a live video camera.  This is then streamed onto the units’ televisions.  This means you can watch the waterhole from the comfort of your sofa.  As soon as you spot an animal on the screen, you’re able to rush down to the waterhole through a tunnel, into a hide which overlooks the waterhole.  This is particularly good at night after the park gates close, as it is one way of spotting the nocturnal habits of some animals.  These elephants (above) however, weren’t happy to have us in the hide.

They call it rhino love

One of the most moving things we saw at the Kwa Maritane Bush Lodge waterhole was on the first night (when I forgot my camera, so have no pictures to prove it!).  At first 2 rhinos arrived:  mum and teeny, weeny baby rhino.  Soon they were joined by another 2 rhinos:  mum and bigger baby.   The two small ones walked up to greet each other, but the older one and his mum became aggressive, and the little one would back off.  A minute or so later, he’d try again, and each time he’d get a little closer.  Eventually they were touching noses, whereafter the little one started to lick the bigger rhino’s face.  He licked and licked and licked ….  Both rhino mums turned away and left their kids to bond.  Eventually, quite some time later, they bid their farewells and disappeared with their mums in different directions.

It was a memorable moment that I’ll treasure forever.  Just wish I had captured it on film.

Elephants in the Pilanesberg National Park are legendary – they are really naughty and dangerous!  When you are competing with a few tons of flesh, you know that you need to back down and show respect.  Unfortunately no-one told this BMW 4×4 in the picture below.

The elephants were in the road, and had stopped all cars as no-one was brave (or stupid) enough to try and pass them.  Finally this 4×4 BMW decided to risk it.  As soon as he started to move forward, the elephants started moving towards him, warning him.  Another elephant joined the slow advance towards the car, and the car had to beat a speedy retreat!

Selection of other animals

This little chap was sitting outside our unit catching flies.  Only about 20cm long, and no idea what type of reptile creature he is, but he was quite happy to pose for me.

We saw many giraffes, but this the the largest single group together.

Mr Kingfisher drew much attention.  There were 3 professional photographers who took a keen interest in his diving and hunting.

I love the picture of this kudu and giraffe …

We didn’t see too many cats this time, but did come across this lion male feeding on a blue wildebeest whilst the female was taking a nap.

We went in search of the endangered black rhino, but they remained elusive.  The white rhino is far less skittish and we saw them often. 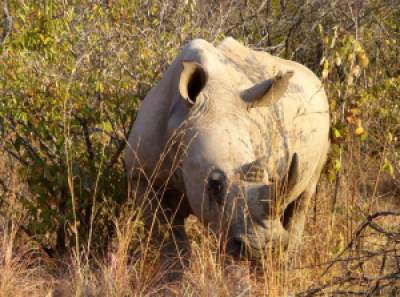 In the middle of the park, there is a cafe next to a waterhole.  Here they put out salt licks for the animals, which they absolutely adore – there is always a fight or stand-off to get to the lick ahead of others.

Zebra, in my opinion, still remain one of the most photogenic animals around.

One of the most incredible sightings was a sighting of a honey badger.  This is a an animal that is hard to like!  It made the “Bad ass of the week” on this website, where you can also see a picture of what it looks like.  There was no time for me to get my camera out as it was so quick!
We arrived back on Friday via the Hartebeespoort Dam – an interesting journey.  Details of the journey will follow soon.

This site uses Akismet to reduce spam. Learn how your comment data is processed.